I went on a social-distancing daycation to Shirley, MA yesterday. Sam and I left the house about 10am and returned home at 5pm. The spring weather was perfect: 60 degrees and sunny; and the bugs have not yet swarmed, nor has the humidity yet suffocated, as they both do in the summer. Perfect for some #hikingthroughhistory!

Shirley is a small town in central MA, about 40 miles northwest of Boston and only 13 miles south of the New Hampshire border. Like much of central MA, it was probably inhabited by the Nipmucs prior to European settlement, and by various other ancient Native American tribes before them, though little recorded evidence of their time on the land exists today and even less archaeological evidence has been sought. European settlement began in the 1720s with the contruction of mills on the Squannacook & Nashua Rivers. Shirley was incorporated as an official town* of Massachusetts in 1753 and was named after the colonial governer of Massachusetts at the time, William Shirley. 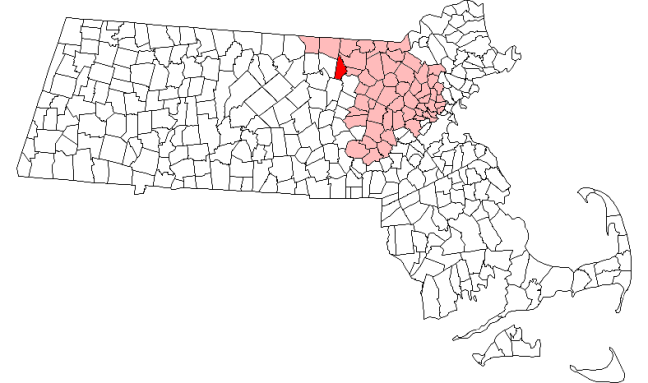 For our daycation, we arrived in Shirley armed with a smart phone, a car full of gas, a packed lunch, and our two dogs. Before leaving the house I did some quick research and came across this handy site: Shirley Historical Society’s Points of Interest Map. We set our GPS to “Shirley, MA”, parked as soon as we saw a cluster of historic buildings, oriented the Historical Society’s map to our Google Map, and set off exploring. We landed in Shirley Village, one of two historic downtowns. (The other, Shirley Center, we visited on the same day and will be the subject of a separate blog post, as will the Shaker sites of Shirley, MA. While Shirley Center was the colonial downtown of Shirley, Shirley Village became the industrial downtown of Shirley, with its proximity to the mills and railroad.)

We parked facing a gurgling brook and old mill site. A small red, wooden building lay at water level and was open at the bottom for the brook to pass under, presumably to move an indoor water wheel. A sign on the building named it “Umbagog on the Catacunemaug” and our research told us it was 19th-century (pre-1875 was the best records could find) and that the original water wheel and gears were still preserved in the building, though our eyes could not detect them through the dirt-streaked windows. According to a 2006 report done by the Massachusetts Department of Conservation and Recreation, there has been a mill on this site since 1749. (The first was built by a Samuel Hazen, whose family continued to enjoy stature and prominence in the town for some time after.)

A much more ostentatious presence looms over the Umbagog Mill on the Catacunemaug Brook. The President Suspender Company Building (c.1881, clocktower 1890) made –you guessed it! — suspenders. Later it merged with the Boston Belt company and cornered the local market on pant-securing devices. It still operates as a manufacturing plant today, but is now owned by All-Star Sporting Goods, which produces mostly gear for baseball, based on my quick browse of their website.

Leaving the banks of the Catacunemaug Brook, we stood in the main intersection of Shirley Village — the crossroads of Leominster-Shirley Rd, Center Rd, Front St, Lancaster Rd, and Harvard Rd. Prominently placed at the head of this intersection is the 1894 Fire Station.

In 1972 the fire station building was changed to a police station. In 1999 it was used for storing hospital equipment for the town’s Council on Aging. In 2002 it was sold by the town to Ampac Enterprises, a division of All-Star Sporting Goods, which owns the nearby Presidential Building, and is used for storage.

South of the old fire station is another demanding site: the Shirley Christian Fellowship Church. This church still holds many mysteries for us, mainly because we couldn’t find any history on it. The builidng is clearly old, probably at least 100 years, but I was baffled that it wasn’t listed on the Historical Society’s points of interest. Further, the churh’s website gives no history on either their congregation nor the building. Like many old New England churches it is white, wooden, has a tall spire, and is prominenlty placed in the center of downtown, which makes my educated guess place it at the dawning of this village. However, it’s asymmetical desgin and covered drive-up entrance are atypical of traditional, congregational New England church architecture, moving my educated guess marker to after the very early 19th century. If I had to place a guess, I would bet it was built between 1840-1890, certainly making it old enough to place on the historical society’s points of interest. If for no other reason than to allay the baffled tourists.

Right behind the church, on Lancaster Rd, is the original Hazen Memorial Library (c.1893). One of the reasons it took so long for Shirley to acquire a library is because the residents couldn’t agree on whether it should be located in the historic town center, called Shirley Center, located two miles north, or whether it should be located in the more populas industrial-aged town center, Shirley Village. The latter won out when a wealthy patron of Shirley Village, Betsy Little Hazen, the wife of Samuel Hazen (whose family was the first to build a mill in Shirley Village in 1749), died in 1893 and bequeathed $3000 to the town solely to build a library in Shirley Village, stipulating that it had to be completed within the next two years. With a deadline in site, the town looked for a plot of land on which to put the library and a great-nephew of Betsy Little Hazen stepped up, Thomas Little Hazen. Thomas donated this 1/4 acre parcel of land, the town put up another $2100, and the same local architect who designed the nearby fire station was hired.

The current Hazen Memorial Library is located 1 mile east off of Front St on Keady Ave. 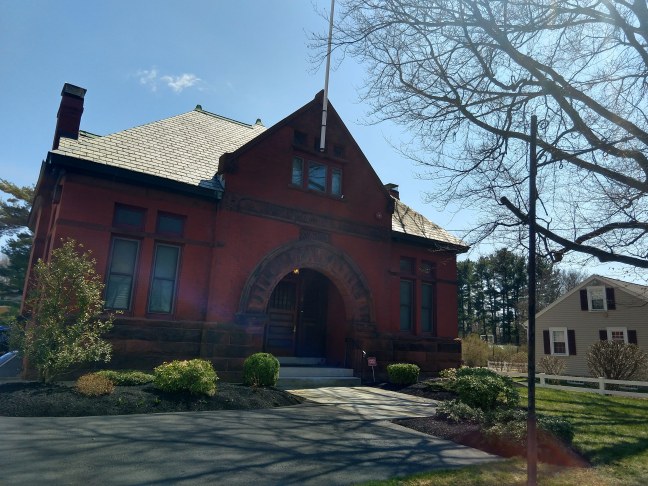 Sam and I continued strolling down Lancaster St and came upon numerous other old-looking buildings, most of which look like private homes.

Half a mile from the start of Lancaster St. is the Lura A. White School (LAW).  LAW was built in 1937 as a WPA project and was named after a 50-year veteran teacher, Lura Augusta White. It still serves as the town’s elementary school today, with additions towards the rear from the 1960s and ’70s.

And so ended Sam’s and my historic tour of Shirley Village. We turned around on Lancaster St., crossed the Catacunemaugh Brook back to our car, and travelled north to Shirley Center, the colonial downtown of Shirley, MA.

*Prior to 1775 incorporated areas were called “districts”. An legislative act in 1775 transmuted all districts into towns.

Edin is a fully responsive theme that helps you to create a strong–yet beautiful–online presence for your business. Edin's layout adjusts itself depending on the device you are using. This means your site will look good not only on laptop browsers, but also on devices with smaller screens, such as the iPad and iPhone.
Loading Comments...
%d bloggers like this: